Dryer Than You'll Ever Be 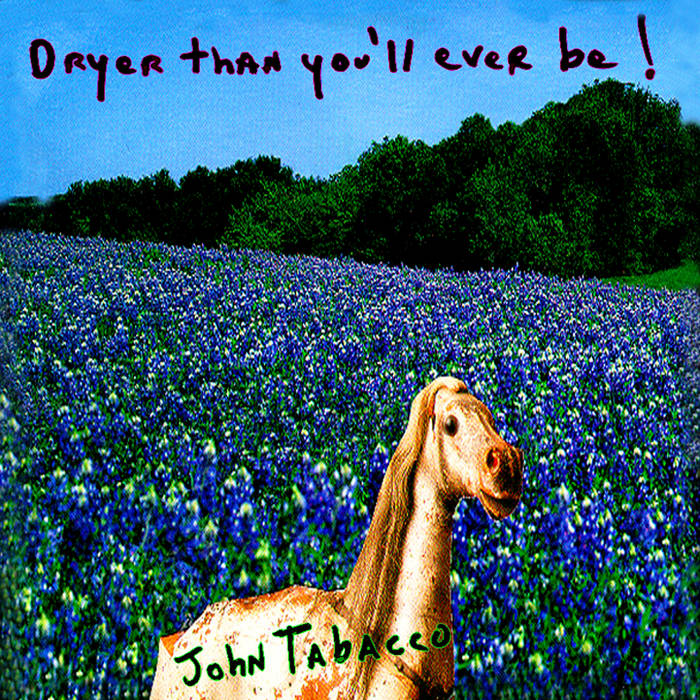 The majority of these demos were realized on a Casio CTK 6ll keyboard my mother had in her room that houses most of her “intricate miniature replications”. Depressed as usual, (which oddly enough brings out the creative in me) I sat there in front of this munchkin sized self contained sound replicator and jokingly said to myself: “Hum, a hundred rhythms on board.” “I guess I’ll write hundred tunes.” I ventured out into the garage and found an ancient boom box with a built in cassette deck. I psychically located a pair of cruddy Walkman™ headphones buried in a closet and plugged it in to the mic input of the box. The result was not a great sound to say the least, but good enough for me to hear my ideas back. I sat down all confident like and just went through each pre-programmed rhythm. I played bass patterns on my left hand. The bass notes would trigger a cute, generic accompaniment you could sing a melody over. I sang what ever came to mind. All of it subconscious stuff centered around sexual things, horses, religion and the word “sister”. In two hours I had about thirteen ideas for songs. Some more finished than others. I went home with this scratch tape and listened to it in the car about 20 times. Shortly there after, I brought the CTK 611 back to Sonic Underground studios and proceeded to dump in various rhythms of then solidified ideas, into a Apple™ Quadra computer. I edited them up, leaving me a good working two track mix to sing over. The finalizing of the lyrics came quickly and minimal overdubbing was obvious. This was just stupid fun while I awaited word from the people at Sony Studios about whether they were interested in licensing the SA3™ mastering process Bob Ball and I had been hawking since 1995. As it turns out they were only interested in schematics about the process. Eventually they gave up calling us after realizing we weren’t about to disclose any significant information without a legally bound contract .


The CTK611 keyboard was like having a new writing partner. But one who was not wishy-washy about the ideas it presented and of course as far as I could see not particularly emotionally attached to whatever changes I wanted to make. You get what you get and make the best of it. The challenge was to take generic sounding background stuff I would never think of and impose my own idea of what this style should sound like. Tabacconize it . Of course leaving it as a mere demo did not quite sit right with me. I executed fairly decent vocals on these suckers and if I decide to record these pieces with a “real band” I may still use them.


The catch phrase that runs through out: “Dryer Than You’ll Ever Be” is the kind of absurd commercial slogan some robot consumers would actually fall for without even questioning the logic. Typical Slip Code jive. Here it is. You need it. It doesn’t even work but you have to buy it anyway. We say so. You get my drift? So why is it in these songs you might be wondering? Well, my housemate Gian DiMauro wrote the word “dryer” in big letters on the erasable bulletin board we have in our kitchen referring of course to the state of his laundry. Not happy to leave well enough alone, I tagged on the words “than you’ll ever be.” We had a brief laugh about it and that became the phrase of the month. So I commemorated this bit of absurdity in this recording. Does it have any other real significance? Probably, but limited space here doesn’t permit me to go into any in deep cosmic details. Lucky you.

Basically, this collection of songs reflects the bullshit I’ve been going through, trying to advance my career in the music as well as the spiritual world. I’m pretty sure at this stage of the game that I am not welcome in "Music World" and I suppose I will float peacefully in the waters of musical obscurity as long as Sonic Underground Studios is around. As for spiritual truth, I think I’m getting closer to something wonderful the more I give up my expectations and read between my immediate reality. I think. Anyway, that’s about it for now. Bye.

Lovingly mastered of course by Bob Ball for
Sound Archeology™