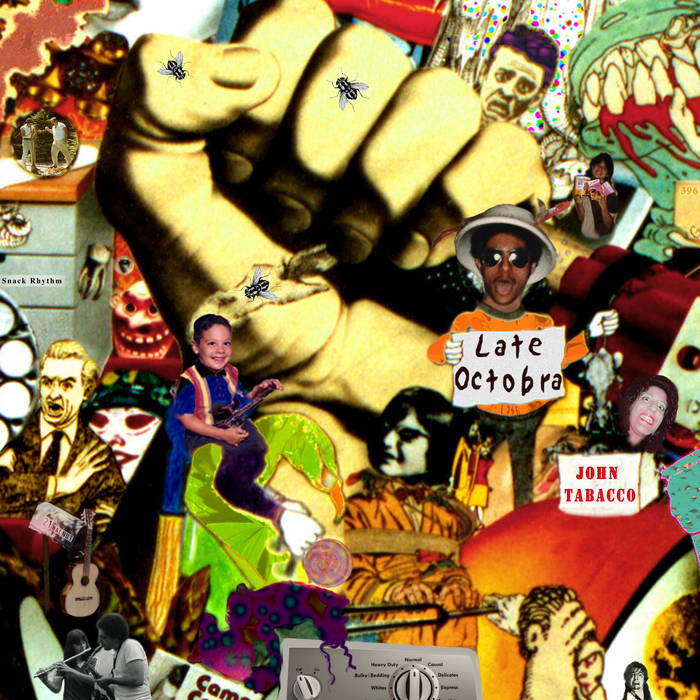 There are a lot of esoteric things going on here that were scattered all over the place i.e. cassettes, 1/4 inch reel to reels, 8 track tape, 24 track tape, PCM tapes, etc… This is an attempt to try to make some musical sense out of them. This CD is full of clues as to where stuff in future CDs came from and refer to. It's fast paced, absurd and no, Nick DiMauro and I were not stoned during some of the bizarre conversations. We were actually a few weeks away from taking a trip across the USA with my sister Laura so we took that anxious energy and filtered it through my home studio and let the cassette machine run. It was hot in the room (“We sweat a lot in here”), and I think that cooked our brains sufficiently to come up with a few funny musical improvisations.

The work is really broken up into two sections. The first half sort of ends around “Gorgo Twain”, finally leaving the Nick and John conversation and veering off into some musings that took place toward the end of Backdoor Records at Modern Voices recording studio circa 1989 -91. As soon as Meryl and I break into our silly improv "If It Don't Work" the CD becomes a little more conventional in it's approach. There is the occasional montage but mostly it's odd songs that never had a home until now. Basically, this disc is pointing its way to my first 24 track CD Life Here, It's Anybody's Guess.

It was a crazy time where the creative juices were so out of control I really did not know how to control them. Sonic Underground Studios came about around 1992. I finally found myself a base where I could take the time to really see what it was I was channeling. This CD is me working out the musical kinks. Self-Indulgent? You bet. Worthwhile art? Who's to say? More likely sincere sound buffoonery entertainment for a fan base I have yet to really identify. Perhaps I may never.

SOUND IS GOOD FUN...
Since I can remember in this life time, I have always felt at home with colorful, dense collages. The more movement going on, the more alien, the more hilarious, the more absurd, the more I was intrigued. I still haven't figured out why. But I do know that music did not fall into this collage fetish until the summer of 1968.
Blame my cousin Louie Flemal . He was six years older than me and he had a hickey which he bragged about for hours. Eventually he thought I was a cool enough kid and invited me into his hip black light / lava lamp room. It was there he played me the Beatle’s White Album. I sat on the floor and listened intently. Every song sounded great to me, and so familiar; almost as if I had known them since birth. As the last side of the album was coming to a close, I noticed there were no lyrics for this long piece called Revolution #9. When it came on, I sat there with my eyes and ears wide open and realized why. This was no standard song or simply an instrumental. It was a dense, chaotic, scary sound fest that blew me away. “Number 9” ,"Number 9", all over the place. What a trip! Where in the world did all that existential music in the background come from? Was that a re-mix of “O b l a - D i - O b l a - D a” under Lennon's strangely equalized voice? Why did "He Become Naked?" Are they saying "Paul is dead ?" or " Tow that line ?" Does “Number 9” really say "Turn Me On Dead Man " if played backwards? Since I was too scared I might break my father's only record player I didn't try to play it backwards. I did however wear down the needle listening to this piece for hours. And you know what? After a while it wasn't all that chaotic. Even though it was mostly subconscious stuff it was some how connected. My listening habits changed. I started to appreciate the beauty between unrelated sounds in repetition and the recalling of an idea when you least expected it on a familiar canvas, i.e. a symphonic piece weaving in and out of a shower stall with the water running.

CONSEQUENTLY :
A few Beatle’s Christmas messages later around 1974, I came across a largerwork of this collage style composed in 1967. It was a little more clear cut in terms of form and truly bizarre. The piece I'm referring to i s Frank Zappa's "Lumpy Gravy". This album featured some classic Zappa themes ingeniously spliced with existential conversations about pigs and ponies, sped up voices and humorous snippets from very arcane records. It was "Almost Chinese" and far more fun than anything on TV. I ate it up and became a social outcast in junior high school. Zappa's editing technique and concept of tying all his influences and music together was and still is, unprecedented in rock music. With each listen I would find more references to other composers and writers i.e. S t r a v i n s k y, Webern, Varese, William Burroughs etc. Zappa's own philosophy and the people in his absurd world started to unravel. It was like having a one sided pen pal. Listen to any two Zappa albums or pick up a video (Uncle Meat) and you'll hear and see what I'm talkin' about. I learned a lot from F.Z.

AND, BUT ALSO :
Around the same time, I discovered The Firesign Theater, ( four or five guys who produced the funniest, most intricately absurd radio plays this side of England's “The Goon Show”). Once again with each listen, the catchy voices, the esoteric references, the odd literary juxtapositions, the connected flow between albums and the sudden contrast between moods were evident. This was my kind of world : lots of sound that never stopped and memories of things I didn't even know I had.
Check out "How Can You Be In 2 Places At Once, When You're Not Any Where At All?" Then track down their other CDs and buy them.

ANYTHING ELSE?
During my last year of high school, and up through my college studies, I had the good fortune to play in symphonic bands and percussion ensembles. It was first hand experience to really explore and observe the inner workings of such great pieces by Ives, Satie, Berio, Webern, Cage, Stockhausen, Babbit, Ligeti, Xenakis, Messiaen, and Boulez. All of these composers shed some influence on my approach to this montage / collage music. I highly recommend immersing yourself in their catalog.

CONCLUSIONATO :
I'm a firm believer in creating sound projects that are movies for your ears. For me, it's a whole other plane of existence that makes my short stay on this planet a more enjoyable one. If you are one of those creatures interested in absurdity, contrast, contradictions, connections, and colorful cartoonish vibes, this recording is for you. Turn off your eyes, open your ears, relax and float down stream or sit down in front of your computer, do your work and have this stuff playing in the background. You might be surprised at what will stick in your mind when you wake up the next day.

This collection is dedicated to Col. Hampton B. Coles and Friends and Mr. Dave Siegel, without whom I would not have had the unlimited freedom to experiment with digital editing. Thanx Dave. It's a dream come true. The main conversation that runs through out LATEOCTOBRA is a spontaneous discussion I had with my friend Nick DiMauro in my bedroom 5/6/86. Earlier dialogue (actual readings from my first play "Dinner Snips") feature my sister Laura circa 1980.

A few works such as "Progressive Akai-ism" date back as far as 1980 and were realized on an Akai GX-4000 D reel to reel. Some of the instrumentals were created using two Macintosh based music programs:
PASSPORT’S PRO 5 & OPCODE'S STUDIO VISION) circa 1990 -92. Songs such as The Boy Had A Tongue were realized on a Tascam 38 8 Track Recorder.