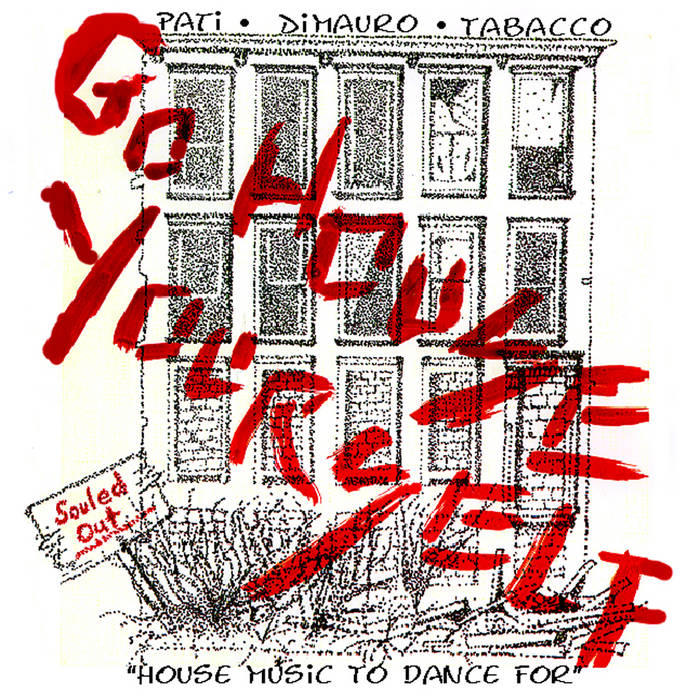 The Origin of Go House Yourself

One summer night in 1989 Chris Pati, Nick DiMauro and I went to some local dance club in downtown Huntington, NY hoping to hear a snippet of a 12 inch, vinyl record single we had edited a few months earlier. We just finished a long and tedious engineering session trying to make someone’s cruddy recording sound a little less cruddier and we were depressed because our biggest pair of monitor speakers (the ones used to check out how much bass is on a recording) still didn’t come back from the repair shop and the studio biz for that month was slow. We were sure about our talents but no one in the music world seemed to care, so our attitude was how shall I say... Shitty? At the time, our own homespun label, Back Door Records had released Marci Geller’s 12 inch single “Shake You Up”. We were learning about the pains of retail tracking and had spent that winter working with a DJ by the name of Stu Best. Stu was kind of a mock “Italian Guido" character that showed us how to create extended dance re-mixes from Marci’s 24 track tape of “Shake You Up”. This is a customary procedure done to most pop dance records if ya don’t already know. He also stressed how important it was for him to have a piece of toast before every session. Hey, whatever works. Anyway, the single had gone through all the expected pay off channels in order to get some airplay and sales. Marci did her best to cover the dance club circuit but basically we found ourselves being ripped off by a greedy promotion company and lied to by radio DJs. The president of Backdoor Records, (a young, trusting, quiet man in his early twenties), Joe Remson soon suggested begrudgingly, that we try to put out another single. But what to put out? We didn’t know. Angry and frustrated, here we were at this club confronted with a herd of white Long Island disco heads, grinding away at the obnoxious pounding of a four on the floor kick drum that could easily have been used as a weapon during some current Middle East war. Amidst the typical dance music however, was a new sounding groove that while still being obnoxious to me, was rather bizarre in harmony and form. Some of it I actually enjoyed. Nick and Chris instantly dug it and they told me it was called house music; more specifically, “This Is Acid” by Maurice Starr. After about an hour of soaking up the seamy atmosphere of this disco fluid exchange, we left in an aggressively snotty mood, screaming out all sorts of existential profanities at no one in particular. Someone started to say the word “HOUSE” in a rather bizarre voice and the three of us all agreed that this new dance stuff was a piece of cake to write. (Not necessarily true we would find out later). As we waltzed in the moist midnight air back to our car, it was Chris who eventually screamed out “GO FUCK YOURSELF” but for “street” commercial reasons we quickly modified that phrase into “GO HOUSE YOURSELF”. In an instant, the clichéd light bulb lit up. “Hey, what a ridiculous idea for a house piece.” “Lets make tons of money.” “We’ll show those bastards!”

Half-heartedly we made our way into a diner laughing, choking, ordering toast, now feeling somewhat energized. This was the perfect way to get rid of our music business frustrations; brutally make fun of a popular musical trend and record it without giving a flyin’ rat’s ass what anyone thinks. Yeah... EAT ME! And so, on the back of a paper place mat Nick channeled the GOD OF ABSURDITY and quickly scribbled down the lyrics about “vinyl shoes” and “back door hoagies” and “cash next to my wallet” etc... Warp factor 47, and we were back at the studio messing around with some beats and basic keyboard parts. Nick and Chris (in my opinion always in competition) came up with most of the groove with me just adding those strange (not so strange anymore) John Tabacco harmonic ideas that could easily upset an A&R clone at any one of the major labels. After lying down the rap, which Nick did in one take, we put in some wacky Emax samples I had slated for a future tune. One such sample was the infamous chain saw, introduced in a typical Dan Robinson type voice (a talented songwriter Nick and I worked with years earlier). The other sample (just before that magnificent minor nine guitar chord) was a slice from an unfinished Chris Pati song called “I’ll Be Waiting”. The results were just as we suspected. Hip but contemporary. Maybe it sucked. We didn’t know. We had no way of measuring the amount of bass. We didn’t care. It was fun. There was toast everywhere... sort of. In an instant, GO HOUSE YOURSELF was mixed and ready to be pressed. We took a quick, cold nap in the studio. Later that afternoon, we played it for Meryl Mathews, Scotto Savitt and Joe Remson. It got the big thumbs up. This was the next Back Door single. Now it’s time! We’ll take over the dance industry! Sure. Ok, but first we needed a name. We tossed around the most obvious ones: Martin Luther Seizure, White Pope Pooper, There’s A Sheep In My Ass, King Jewish T___, The Mona Lisa Soloman Body Bag Brigade etc… None of them quite fit. Too commercial! Eventually, we settled on Souled Out. With no lawyers in sight, all three of us signed each other’s contract to Back Door Records, had some chicken and broccoli (glass on the side) and created a few club re-mixes from the original house mix. First we edited the Popular Radio Mix. Initially it seemed easy enough to realize but we actually ran into a problem because the last edit didn’t sound smooth. Maybe a voice held over or the sound pressure dropped. I can’t remember exactly what the problem was (maybe just bad tape editing on our part). Anyway, I suggested to Nick that we put in an outrageous explosion to cover up the problem. And I knew just the right explosion. It was a sample from a holographic sound FX disc someone gave to us a while back. Lo’ and behold, it worked! We loved it! Unfortunately, Mr. Phil Austin at the record pressing plant was not too pleased. His cutting needle jumped five feet off the lathe when that section came up. Obviously our house parody was made for the dynamic range of a CD, but we were still making vinyl records back then. Oh well. Let’s face it. WE DIDN’T CARE. It sounded exciting!

A link to the video - www.youtube.com/watch?v=rTYawGC7yc0